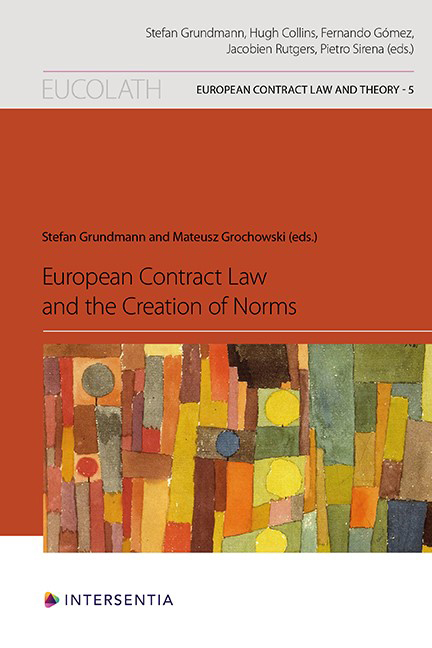 The Creation of Norms: An Evolutionary View on European Contract Law

When creation of norms is the theme, European contract law shares a development that is global, that can be summarised as the advent of a variety of competing rule-setters and that has characterised the last five or six decades. It has moved from one government contract law until the second half of the 20th century to complex governance, which also embraced contract governance structure. At the same time, European contract law is special within this broad global flow – strongly propelled mainly on the two sides of the Atlantic – in that it has added considerable complexity to this already rich picture. It has done so, for instance, with respect to multi-level contract law, optional codification and with a strange body of adjudication of contract law at the federal level, with a strong command from above, namely a relatively activist European Court of Justice (ECJ). This first overall account of the vast picture takes up both the global flow and the added European ‘jewels’. It does so in an order inspired rather by substance than by origin. In other words, global and European developments are not segregated, but rather a substantive logic is followed.

LAW, STATE AND CONTRACT: BETWEEN THE OLD AND THE NEW PICTURE

The beauty of the theme lies in the change from an old to a new picture. What is perhaps the summa of the ‘old picture’ was described most beautifully in the Ancien Régime, in 1748. The book referred to – dealing with the very concept of law(s) (l’esprit des lois) – contains as its most famous (set of) phrase(s): ‘Mais les juges de la nation ne sont … que la bouche qui prononce les paroles de la loi; des êtres inanimés, qui n’en peuvent modérer ni la force ni la rigueur. C’est donc la partie du corps législatif … [l’]autorité suprême à modérer la loi, en faveur de la loi-même’. All is centred on the sovereign legislature. This may be the ‘old picture’, but it stems from a genius that has also clarified the concept of separation of powers – albeit with a very weak judicial power, still rather an instrument of the other two powers than one on its own merits.