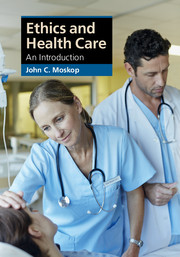 from Part I - Ethics in health care: role, history, and methods

On April 15, 1975, 21-year-old Karen Ann Quinlan attended a friend's birthday party at a bar near her home in New Jersey. Karen was on a strict diet at the time, and she was also taking the anti-anxiety drug diazepam (Valium®). After several drinks at the party, Karen felt faint, and friends took her home and put her to bed. When they checked on her fifteen minutes later, she had stopped breathing. They attempted to revive her and called for assistance. Emergency medical technicians arrived, continued cardio-pulmonary resuscitation efforts, and transported Karen to a nearby hospital, where she was placed on a mechanical ventilator.

Karen remained hospitalized, on ventilator support, for the next several months, but she did not regain consciousness. Neurologists diagnosed her condition as a “persistent vegetative state,” a form of irreversible unconsciousness caused by lack of oxygen to her brain during the time when she was not breathing. Karen did, however, retain some brain activity. She did not meet established brain-oriented legal and medical criteria for death (sometimes called “brain death”), since those criteria require a finding of “irreversible cessation of total brain function.” Her physicians were convinced that Karen could not survive without ongoing ventilator support.

Karen's parents, Joseph and Julia Quinlan, had consented to all recommended life-sustaining treatments for their daughter during the first three months of her hospitalization. By the end of July 1975, however, they reached the conclusion that Karen would not want continuing life-sustaining treatment in a state of permanent unconsciousness. The Quinlans were devout Roman Catholics; after consultation with their parish priest, they requested that Karen's ventilator support be discontinued and that she be allowed to die. Karen's physicians responded that they could not honor this request, on the grounds that removing Karen's ventilator support would be a form of euthanasia that would be immoral, illegal, and contrary to medical standards of care. Karen was a patient at St. Claire's Hospital, and the hospital supported the physicians’ decision to continue ventilator support. What should have been done to resolve this disagreement?

With the rapid expansion of health care services in the United States in the decades immediately following World War II, patients, health care professionals, and the American public at large confronted new and challenging moral questions about what treatments should be offered and provided, especially near the beginning and the end of human life.