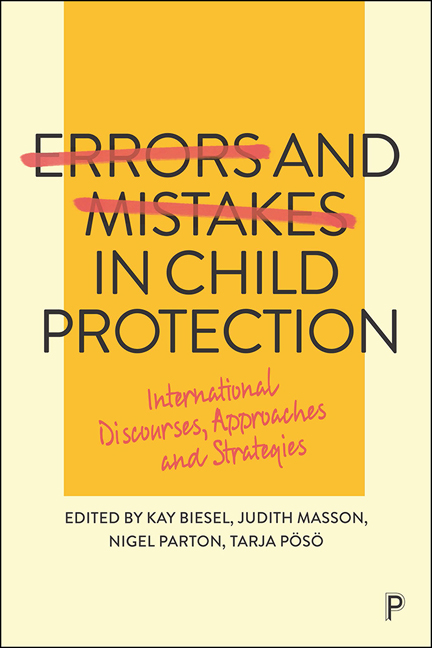 10 - Discourses, Approaches and Strategies on Errors And Mistakes in Child Protection in Germany

A detailed history of child protection scandals in Germany is yet to be written. But most early scandals in the German Empire (1871–1918) and the Weimar Republic (1918–33) seem to relate to cases of institutional neglect or institutional abuse (see, for example, Banach, 2007; Richter, 2011: 200). In addition, there was a lot of moral outrage regarding especially moral neglect in lower-class families (Dickinson, 1996). The idea that the state, as represented by state-funded child protection agencies, has the capacity and the obligation to detect maltreatment (however defined) in families in a reliable way and should be held liable for failing to do so, appears to have been absent. By contrast, in the last quarter of the last century the situation changed. Starting with cases in Osnabrück (Mörsberger and Restemeier, 1997) and Saarbrücken, both medium-sized towns in Germany, the failure of child and youth welfare authorities (Jugendämter) to protect children in their own or in foster families became the focus of media attention. This focus has continued ever since with a series of highly publicised child protection scandals referred to by the children's first names for example, Kevin (Brandhorst, 2015), Lea-Sophie and Jessica. Because maltreatment-related child deaths have actually become less prevalent over the whole period (UNICEF, 2003) and Germany has never had a strong culture of holding administration accountable, this phenomenon needs to be explained.

Several developments may have contributed. First, during a phase of social optimism between 1980 and 1990 there was a massive expansion of child and youth welfare in-home services for families in need (Siegner, 2009). This process signalled a changing conception of the role of the state in social matters in continental Europe. Beyond just providing financial benefits, the idea of a ‘caring state’ adopting a social investment strategy was formulated (van Kersbergen and Hemerijck, 2012). Such a state was far more present in the everyday life of vulnerable families and in their social networks, making the detection of maltreatment in families a much more realistic objective. Second, a liberal concept of the defence of children's personal rights against parents as well as the state took hold (Kessl, 2017).