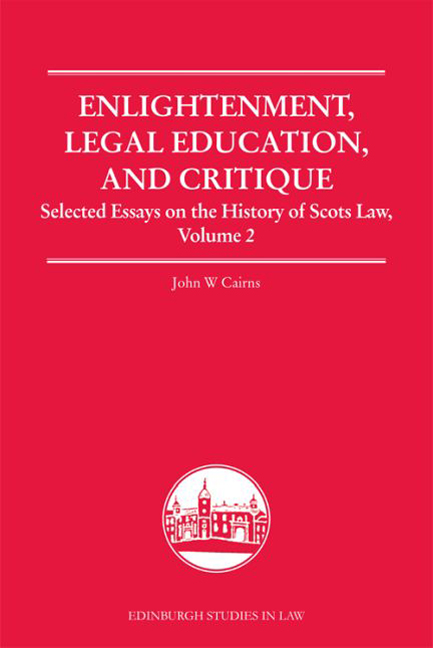 Enlightenment, Legal Education, and Critique
Selected Essays on the History of Scots Law, Volume 2
Buy print or eBook[Opens in a new window]

The essays selected for this volume all deal in some way or another with law and its institutions in eighteenth-century Scotland. The influence of the Enlightenment on Scotland and the impact of the Scottish natural and social or moral sciences on the European and transatlantic Enlightenments are both incontestable. The essays here show how the social – especially historical and philosophical – thought of the eighteenth century affected the essentially Humanist and Dutch-oriented legal culture of early modern Scotland, particularly through formal legal education in the universities.

The Enlightenment, however, was as much about people and institutions as about ideas. Individuals of energy and talent could overcome disadvantages of situation and background if placed properly. Eighteenth-century Scotland was run – often with considerable success – through a system of patronage. Patrons, such as the Earl of Ilay (from 1743 third Duke of Argyll), could promote careers or block them, though themselves subject to ever-changing political and intellectual pressures. Would Adam Smith have achieved what he did without Argyll's initial patronage? It is an interesting reflection. Ideas were promoted not just through publication, but through the possession of positions of influence, such as university chairs or distinguished pulpits. To understand the Scottish Enlightenment properly, it is necessary to think about politics and institutions.

In the later seventeenth century, legal systems and universities with which Scots were familiar had started to innovate, pushing the curriculum in different directions beyond the traditional disciplines of the Civil and Canon Laws. New structures and styles of teaching were also being developed. In France, a reglement of 1679 had required the Universities to teach “French” law. In the United Provinces of the Netherlands such centralised direction was impossible, each Province being a sovereign republic; but the popular and successful Dutch law schools also started to innovate through the actions of individual professors in response to demand. Thus, professors focused their efforts on their private collegia, reflecting student need and economic opportunity. They developed classes on the ius hodiernum, on a specialised ius publicum, and on ius naturale and ius gentium. The curriculum opened up in new ways. Further, they started to teach from compendia, rather than the actual texts of Roman law; this last was to prove controversial.