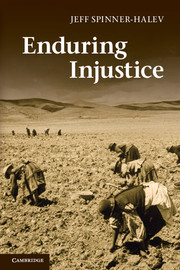 Enduring Injustice
Buy print or eBook[Opens in a new window]

In 1829 gold was discovered on the land that the Cherokee Indians lived on and called home. The state of Georgia wanted the land for its own residents. Congress passed laws allowing for the removal of Indians, which President Andrew Jackson and later President Martin van Buren supported. The Cherokee, however, who declared themselves a sovereign and independent nation and established a written constitution, went to the US Supreme Court to protest the state of Georgia's attempt to impose its laws on them. The court ruled that it had no jurisdiction in the case; while the Cherokees won an indirect victory in another case, it didn't matter much, as the federal and Georgia government were intent on expelling the Cherokee and would not allow a judicial ruling to prevent them from taking the Cherokee's land. Soon enough the US government expelled the Cherokee from their land in Georgia. Forced to walk from Georgia to Oklahoma in the middle of winter, about four thousand tribal members died (approximately a quarter of the tribe) because of the inadequate food and clothing supplied by the US government on what is now called the Trail of Tears.

In 1944 Stalin accused the Crimean Tatars of collaborating with Hitler (a few had, but most did not, and many Tatar men served in the Soviet army) and expelled the Tatars from their homeland in the Ukraine, sending them to exile in Soviet Asia. Estimates vary, but perhaps nearly half of the population died en route to exile or shortly afterwards. Some returned to the Crimea after the collapse of the Soviet Union, though they have done so in the face of some resistance from those who now live in the Crimea, and many are now impoverished; many other Tatars still live in exile, waiting for a propitious moment to return.