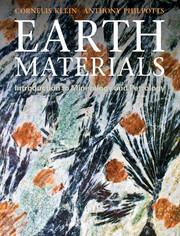 Chapter 15 - Some economic minerals, mainly from veins and pegmatites

The minerals discussed in this chapter are commonly found in either hydrothermal veins or pegmatites. Hydrothermal deposits result from precipitation of ore and gangue minerals in fractures, faults, breccia openings, and other spaces, by replacement or open-space filling, from water-rich fluids ranging in temperature from 50° to 700°C but generally below 400°C and ranging in pressure from 0.1 to 0.3 GPa; the fluids are of diverse origin. Pegmatites are exceptionally coarse-grained igneous rocks (Fig. 8.24), usually found as irregular dikes (Fig. 9.6), lenses or veins, commonly at the edges of batholiths. Their most common overall composition is that of granite, with grains 1 cm or more in size. Pegmatites represent the last and most hydrous portion of a magma to crystallize and, therefore, may contain high concentrations of minerals that occur only in trace amounts in granites and are concentrated in the hydrous-rich residue.

The first five minerals of this chapter are native elements, Au, Ag, Cu, C (diamond), and S. Gold in its native state is the most important ore mineral in gold occurrences. However, Ag as a native element, is less important as an ore mineral than acanthite, Ag2S; proustite, Ag3AsS3; and pyrargyrite, Ag3SbS3. Similarly, native copper is a minor ore mineral when compared with several copper sulfides described in this chapter. Carbon, as diamond, is the only source of diamond and bort. Native sulfur is the major source for the production of sulfuric acid, H2SO4, and hydrogen sulfide, H2S, but large amounts are produced as the byproduct from the processing of numerous sulfide ore minerals.