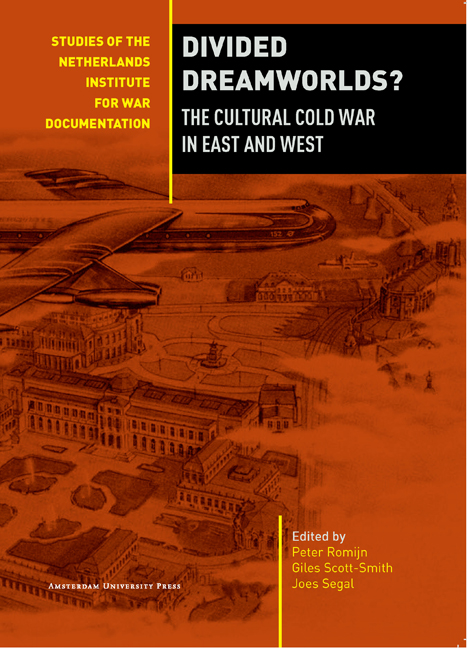 Divided Dreamworlds?
The Cultural Cold War in East and West

The present volume is the result of a conference held in Utrecht on 26-27 September 2008. The aim of the conference was to investigate the cultural interchange across the East-West border during the Cold War, as a counterbalance to the more traditional academic approaches that study the two power blocs exclusively in the light of their antagonistic power interests or political ideals. The impressive response to our call for papers suggested positively that we had addressed a topical issue. From the many proposals we received we had to select a limited number for the conference, and for the present volume we then had to make a second selection in order to strengthen the book's coherence around three sections: ‘Arts and Science Between the Blocs’, ‘Modernity East and West’, and ‘Post-1989 Perspectives on the Cultural Cold War’. This by no means implies any negative qualitative judgment on the papers we had to leave out.

The conference, an initiative of its three editors, was supported by our academic institutions: the Roosevelt Study Center in Middelburg, the Netherlands Institute for War Documentation (NIOD) in Amsterdam and the Research Institute for History and Culture (OGC) in Utrecht, all of which generously contributed both in terms of organisation and financial support. We are very grateful that the Royal Dutch Academy of Sciences (KNAW) sponsored our conference as part of its 200th anniversary celebrations. Without the enthusiastic and resourceful support of our student interns Helen Grevers, Maaike Hensing and Lieke de Jong, the conference would never have been the success it turned out to be. We also would like to thank our special guests who made important contributions to the conference: keynote speakers David Caute and Ruud van Dijk, Sarah Wilson of the Courtauld Institute who participated in our concluding panel of experts, and Thomas Lindenberger, who chaired one of our sections. A special word of gratitude is due to Thomas Lindenberger and Annette Vowinckel, who generously shared with us their experiences from organising the conference ‘European Cold War Cultures? Societies, Media and Cold War Experiences in East and West (1947-1990)’ held at the Zentrum fur Zeithistorische Forschung (ZZF) in Potsdam on 26-28 April 2007.