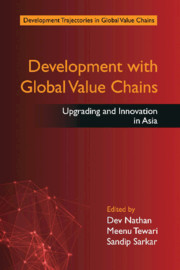 This chapter is an attempt to answer the ‘so what?’ question. After all the experience and analyses of global value chains (GVCs), what does it mean for development policy? The chapter starts by first looking at whether GVCs are just the flavour of the year (or the decade?) or they represent a form of firm restructuring that will not go away anytime soon. After summarizing what was pre-GVC development policy, the chapter looks at the benefits for developing countries of entering into GVCs, even at the very lowest level of low-value labour-intensive production.

Having established the rationale for and benefits from being in a GVC, the chapter then looks at the first steps of upgrading in GVCs – of functional upgrading leading to the earning of process rents. Policies to support such functional upgrading are outlined, rejecting the market fundamentalist (or Washington Consensus) approach of letting the market alone hold sway. In the attempt to earn such rents, the obstacles placed by the Prebisch-Singer thesis, applied to GVC upgrading by Raphael Kaplinsky (2005), are discussed; monopsonistic market structures allow lead firms from high income countries to capture the benefits of productivity increases in the supplier firms from developing countries. But it is pointed out that the growth of supplier economies and the growing market itself are factors that mitigate the dissipation of rents that would otherwise hold sway.

This is followed by discussion of GVC-specific industrial policy, based on vertically specialized industrialization (Milberg and Winker 2013) or concentration on GVC segments rather than entire sectors or products, the development of capabilities in adjoining tasks, reverse engineering and the reorganization of labour as important in moving firms from just earning competitive profits to securing some rents, and for developing countries from low-income to middle-income status.