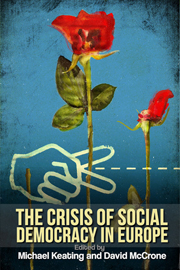 Social democracy and the territorial state

Social democracy emerged within the nation-state at a time when states were consolidating institutionally and deepening their penetration of society. During the first half of the twentieth century, social democrats increasingly saw the state as the vehicle for realising their ambitions of social progress and popular control of the economy. Yet there are competing traditions within social democracy about the nature of the state, its unity and the degree of centralisation or decentralisation most compatible with social democratic aims. I am not concerned here with the debate between supporters of national vs international socialism, although the European question raises very important questions addressed in the contribution to this volume by Yves Mény. Nor do I address the important issue of whether the state should be the primary vehicle for change at all, as opposed to the industrial arena or civil society, an issue covered by Colin Crouch. My concern rather is with the territorial structure of the state itself.

The centralist vision of social democracy which characterised the twentieth century draws on various traditions. First is the patriotic left inherited from the French Revolution, for whom the unitary state is the basis for citizenship and equality, an attitude usually labelled, not entirely historically accurately, as ‘Jacobin’. The entry of the masses into electoral politics from the late nineteenth century confirmed the importance of the nation-state as the centre for political struggle. As the unitary state became widely (but not universally) associated with liberation and progress, regions and localities were seen as bastions of reaction (especially in France).