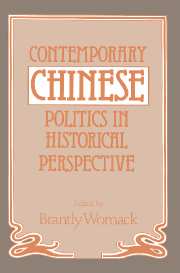 2 - In search of democracy: public authority and popular power in China

The zigzag and sometimes tragic search for democracy has been a central theme of modern Chinese politics. Often the searchers have been torn between the intellectual attraction of the modern ideals of democracy, based on foreign ideologies, and the practical necessity of adapting to Chinese conditions. Democracy in China has remained elusive both as an ideal and as a reality; at no time in the twentieth century has there been general satisfaction with the prevailing relationship between people and state.

The most successful political leaders of modern China – Sun Yat-sen, Mao Zedong, and Deng Xiaoping – have self-consciously pursued “Chinese paths” that have included limited commitments to popular power. It could be said that the successes of those leaders and the ensuing shape of Chinese politics have been based to some extent on their correct perceptions of the existing possibilities for feasible relationships between public authority and popular power, and their failures have been due to misjudgments of those relationships.

Since the summer of 1989, the post-Mao period has taken an especially tragic turn with regard to democracy. After ten years of unparalleled progress in democratizing reforms, Deng Xiaoping and the party leaders are attempting to reimpose unquestioned and unlimited control over society. Can the party really effect such a dramatic, authoritarian turn? Or will the societal forces already set in motion render such an attempt a very harmful but temporary atavism? The practical contradiction between the current policies of control and repression and the earlier policies of modernization through decontrol and openness has made the question of the relationship between popular power and public authority central to any prognostic analysis of current events.