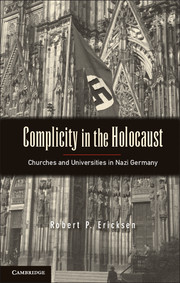 6 - Repressing and Reprocessing the Past

The story told in this book, the story of complicity among “good Germans,” did not begin to emerge for a generation or two. Nazi crimes became public knowledge, of course. Allied military officers, horrified by what they found in the camps, insisted that the German public be exposed to photos and video footage, so that graphic knowledge quickly permeated the national psyche. When convenient, Allied leaders paraded Germans through the camps themselves or drafted them into dragging corpses into mass graves. The Nuremberg Trials then put German atrocities on an international stage. Almost inevitably this story narrowed its lens and focused on a tiny group of “criminals,” the sort of people in the dock at Nuremberg. These were the ones accused of ordering the brutalities, or they were the most egregious perpetrators. The Allies never imagined placing the entire German nation in a criminal court. They did, however, develop an alternative mechanism designed to “cleanse” Germany of the Nazi virus. That mechanism was denazification.

Almost no one today defends denazification. I will argue, however, that the Allies had a more accurate view of the need for denazification, or at least the relationship between average Germans and the Nazi crimes, than did the German public. The postwar German claim that only a tiny handful of criminals were to blame was convenient but inaccurate. I will also argue that German scholarship continued to echo for at least a generation the pattern of prevarication and repression that began in denazification hearings. Finally, I will argue that denazification, for all its many faults, still made an important contribution to the tremendous success story that is postwar Germany.