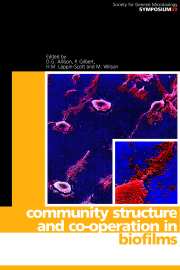 Biofilms in the New Millennium: musings from a peak in Xanadu

Most biological sciences had defined their subject organisms, grossly and at the microscopic level, long before the advent of molecular biology. For this reason, sciences like botany had characterized the structure, even at the ultrastructural level, of the cells and tissues that comprise all of the forms adopted by plants, including all vegetative and reproductive manifestations of thousands of organisms. Therefore, the detailed molecular mechanisms discovered by modern plant molecular biologists fit nicely into a framework of understanding of exactly where these mechanisms operate, in terms of the structure and function of the organism concerned. We visualize the process of transcription occurring on the cytoplasmic aspect of the endoplasmic reticulum, and we can follow the resultant peptides through their various fates, including excretion in vesicles via the Golgi apparatus. The intellectual synthesis within a field like botany is essentially very satisfying, because we could previously see the central genetic control of shape and function, and now we can understand the molecular mechanisms by which this control is exercised and we can manipulate plants using this knowledge.

The relatively new science of microbiology, which has done so much to eradicate epidemic diseases and to improve our lives, is presently reeling in confusion because it has not followed the same orderly development of concepts and techniques. At a very early stage in its development, microbiology embraced two moda operandi that served it well, but damaged it in the long term. First, following Robert Koch, we removed bacterial cells from the ecosystems in which they lived, and grew them in monospecies cultures in fluids or on agar.