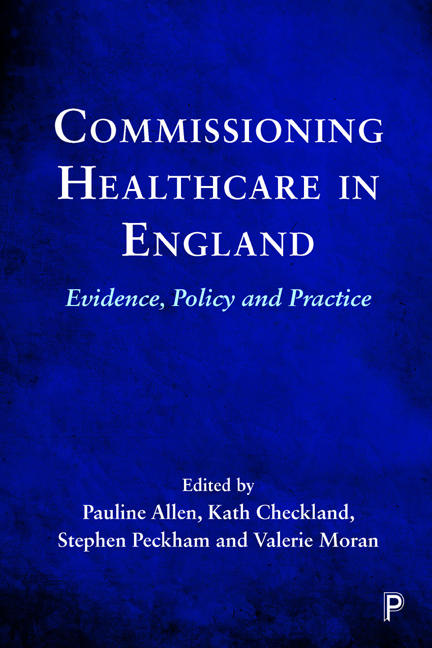 2 - Context: Commissioning in the English NHS

This chapter provides a brief contextual summary, setting out the organisation and governance of commissioning in the NHS. It gives an overview of commissioning from the creation of the internal market in the late 1980s to its consolidation pre-and post-HSCA 2012, and highlights the important changes which were brought about by the HSCA 2012. The chapter highlights the programme theories underlying the internal market and the HSCA 2012, in particular the commitment to competition as a means of improving services and the expected benefits of greater clinical involvement in commissioning. The architecture of commissioning following the HSCA 2012 is outlined and an overview of developments since the Act is presented.

It is perhaps important to note here that clinical involvement in commissioning has been variously referred to as ‘clinically-led’ and ‘GP-led’. In its earliest manifestations (GP fundholding) there was a clear policy commitment to the involvement of local GPs (primary care physicians) in commissioning. As noted in Chapter 1 this policy was driven by a belief in the value of local clinical knowledge, rather than by any evidence of its value. Over time, emphasis in policy has shifted between ‘GP-led commissioning’ (such as fundholding, PBC) and ‘clinically led commissioning’ (such as Primary Care Groups [PCGs]). The use of the wider term ‘clinically led’ has been used by policy makers to signal a commitment to the wider engagement of other clinicians such as nurses and hospital consultants, often in response to representations from other professional groups. Thus, in their first iteration, CCGs were explicitly intended to be GP-focused, but during a consultation period the rules were amended to mandate the involvement of both a nurse and a hospital consultant on CCG governing bodies, and policy documents reflected this by referring to ‘clinically led’ commissioning. However, in practice, clinically led commissioning has generally meant GP-led commissioning, with the involvement of other clinicians tokenistic at best. In this book, for consistency, the term ‘GP-led commissioning’ is used, but acknowledge that policy has, at times, tried to promote a wider clinical engagement beyond local GPs.

The NHS was established initially in 1948 as a hierarchical public Organisation.