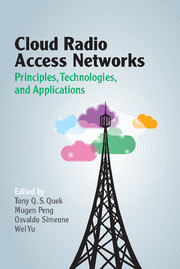 Wireless networking is one of the most advanced and rapidly advancing technologies of our time. The modern wireless era has produced an array of technologies of tremendous economic and social value and almost ubiquitous market penetration. A major contemporary focus of the community of researchers and engineers working on the development of new wireless technologies is the specification and design of the fifth generation (5G) of mobile communications. Among the envisioned features of 5G are an extremely large and heterogeneous population of connected devices communicating with humans or machines (or both) and having highly varied quality of service requirements in terms of latency, data rates, etc., leading to the so-called Internet of Things. To deal with this scale, density, and variety of use, new network architectures are being proposed for 5G. One of the most promising of these is the Cloud Radio Access Network (C-RAN), in which radio connectivity to end-users is provided via densely deployed low-complexity radio heads, and most signal processing tasks are performed in the cloud. This architecture enables the provision of much greater capacity, by allowing both the densification of radio resources and the implementation of sophisticated signal processing algorithms at scale, and doing so at substantially lower capital and energy costs than conventional base-station-centric cellular architectures would require. Edited by four leaders in the field, Cloud Radio Access Networks: Principles, Technologies, and Applications provides a comprehensive treatment of C-RANs, describing in the depth the overall C-RAN architecture, and the many physical layer, resource allocation, and networking challenges that arise in this important and innovative concept, together with potential solutions to these challenges. These advances are described in chapters written by leading contributors to their development, thus providing a clear and up-to-date exposition of the state of the art in C-RANs. As such, this volume should be of considerable interest to researchers and engineers looking to develop the next generation of mobile networking technologies.