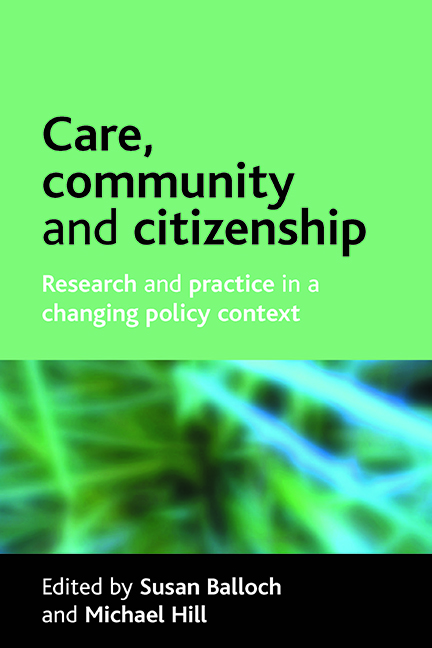 Care, Community and Citizenship
Research and Practice in a Changing Policy Context

Mental health policy has made great strides in the last 20 to 25 years in attempting to shift the delivery of mental health services from the large outdated asylum system. The attempts at consolidating the closure of the asylums, while ensuring the build-up of alternative locally based community care services, have not been without their problems. Criticisms have been levelled at the fragmented and piecemeal build-up of alternative forms of community care throughout the 1980s and 1990s, where gaps in services have been highlighted and where concerns have centred around public safety in relation to homicides in the community and the increased prevalence of mental health problems among the homeless and in the prison population. The wider policy initiatives leading to the mixed economy of healthcare, the creation of the health/social care divide and the emphasis on greater involvement of communities and the voluntary sector in delivering services for vulnerable people have been a mixed blessing.

In the coastal town of Hastings in the southeast of England, a Befriending Scheme for people with mental health problems was established in 1989. The scheme was set up on a shoestring and survived for 15 years during a turbulent period of major national policy changes by attracting core funding from a succession of commissioning agencies beginning with health services, social services, the local health trust and latterly the local primary care group. It was a well-respected local service making a difference to the lives of vulnerable individuals with mental health problems and received the local civic pride award for its work in 1997. However, the service was voluntarily decommissioned in January 2006 as it had failed to attract adequate funding for service delivery and development (core funding had for a number of years been diminishing) and there were concerns regarding its ability to maintain the quality standards for which it was renowned. This chapter takes a critical look at the functions of the Befriending Scheme against a background of severe socioeconomic deprivation and explores what we have learned about its potential role in challenging stigma and combating social exclusion within communities.

The southeast of England is perceived as an affluent area on a broad range of socioeconomic indicators.