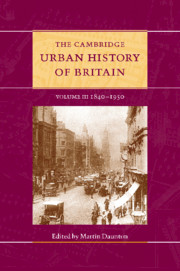 5 - The development of small towns in Britain

from Part I - Circulation

An Evocation of the traditional rural town of the mid-nineteenth century may be found in Anthony Trollope’s description of his English West Country county of ‘Barsetshire’ in Dr Thorne:

There are towns in it, of course; depots from which are bought seeds and groceries, ribbons and fire shovels; in which markets are held and country balls carried on; which return members to parliament, generally – in spite of reform bills, past, present and coming – in accordance with the dictates of some neighbouring land magnate: from whence emanate the country postman, and where is located the supply of post horses necessary for county visitings. But these towns add nothing to the importance of the county; they consist, with the exception of the assize-town, of dull, all but death-like single streets. Each possesses two pumps, three hotels, ten shops, fifteen beer-houses, a beadle and a market-place.

This chapter will trace the evolution of such small urban places over the following century; developments that built upon an already quick pace of change. Peter Borsay concluded that the period from 1688 to 1820 had been ‘for towns years of transformation’. ‘Transformation’ had also been used by Peter Clark to sum up changes experienced by English provincial towns from 1600 to 1800. Clark’s research on small towns for this period, not least in his chapter in Volume II of this series, identifies a number of economic trends causing such transformation. These included nascent industrialisation and commercial expansion, transportation evolution and also more localised developments, such as the building of spas and leisure resorts.