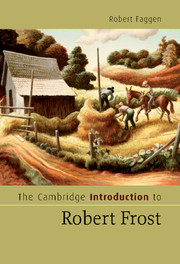 Frost has always stood a large but solitary figure in the landscape of twentieth-century American poets. Unlike almost all of his luminary contemporaries and near-contemporaries — Eliot, Pound, Stevens, Williams, cummings, and Moore — Frost enjoyed an unrivaled popularity with a general readership. At the same time, at least for a long period, Frost had the respect of his peers and of critics as one of the great artists of his era. Yet he has often baffled some critics, scholars, and readers for his appearance of both artistic and political conservatism, a refusal to participate in the ferment of modernist and postmodernist preoccupations with either self-defined ideas of the new or the self-reflexive attitudes toward language. A great craftsman, he seemed to believe in values of individualism, order, and human agency in an age when it had become simply naïve to do so. Yet many readers have, even during his life, perceived his subtle and acute insight into human psychology, and a vision of life in the poetry that though couched sometimes in humor and wit was, without question, terrifying and bleak. Frost developed a way both within and outside his poetry of seeming offhanded if not, sometimes, funny (in all senses of the word) and humorous, often joking with his readers and referring to his poems as jokes. But irony works in many different strategic ways in Frost:

I own any form of humor show fear and inferiority. Irony is simply a kind of guardedness. So is a twinkle. It keeps the reader from criticism … Belief is better than anything else, and it is best when rapt, above paying its respects to anybody's doubt whatsoever. […]