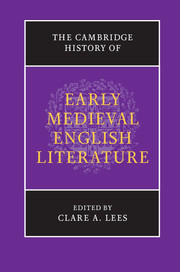 Without question, the most controversial yet persistent effort to assign a generic label to Old English poems has been the identification of ‘elegies’ associated with lament and longing for a lost past. Despite common knowledge that this designation grew out of nineteenth-century nationalism as part of an ‘often idealized and romanticized picture of pre-Christian German life’, and despite repeated admission that the label is technically and historically inappropriate for the Old English poems in question, this generic distinction has steadily grown rigid in critical and editorial practice. In part, critics have sidestepped the inherent problems of this label by expanding from ‘elegy’ as a poetic term to the idea of an ‘elegiac mood’, defined long ago as ‘the sense of the vanity of life, the melancholy regret for departed glories’, and this idea has gradually extended to a general association with lament and nostalgia. The odd result is that the more doubtful the Old English genre became, the more flexible and disparate its definitions, so that – despite nearly a century of study and much evidence to the contrary – the nine poems named as elegies by Ernst Sieper in 1915 are still considered to determine the field: The Wanderer, The Seafarer, The Ruin, The Wife’s Lament, Deor, Wulf and Eadwacer, The Husband’s Message, Resignation and The Riming Poem. All of these poems appear in the famous Exeter Book, the first anthology of poetry in English, and together with Beowulf (which is often said to contain elegies and/or to be elegiac) they include the most studied Old English texts.