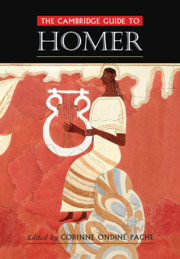 Part I - Homeric Song and Text

Every facet of this topic has generated a lengthy bibliography within the last two centuries. The following touch on some central themes and contain many further leads to other secondary literature.

Grandolini (1996) comments in detail on the Homeric passages dealing with song. Excellent surveys of the dynamics of poetry as depicted in Homer are Walsh (1984), Segal ([1994] 2001), Ford (1992), and Scodel (2002). Peponi (2012) examines responses to song in Homer and the Hymns, with a sustained reading of the Sirens episode and scenes from Odyssey Book 8 in particular.

On the general problems of intertextuality in Homeric poetry see Tsagalis (2008). On relative dating and the crystallization of the Homeric text, especially as it relates to the Panathenaic contests, essential are the works of Nagy (1996a, 2002, 2003a, 2009c, 2010). Kotsidu (1991) has a full appendix of primary texts relating to the festival. Herington (1985) contains a useful section on rhapsodes.

For individual song and recitation genres connected to epic portrayals, a survey with further bibliography can be found in Lambin (1992). On the history of the paean, see Rutherford (2001). Burkert (1987b) examines the interaction of rhapsodic practice and Stesichorean choral lyric. Dalby (1995) looks at other lyric genres. Karanika (2014) analyzes women’s work songs, with modern Greek parallels. Steinrück (2008) speculates about the relation of iambos to the Odyssey. Power (2010) is a superb history of singing to the kithara. The genre of lament has been analyzed fully by Alexiou (2002), Dué (2002), and Tsagalis (2004); Martin (2003) examines Helen’s role as a lament maker.

Important comparative material on the status of poets, the performance of epic, and embedded smaller genres can be found in Lord (1991 and [1960] 2000) and the essays in Foley (2005). Highly relevant comparanda for oral-traditional poetics are in Williams and Ford (1992, Ireland), Austen (1999, West Africa), and Reynolds (1995, Egypt). Pagliai (2009) surveys poeticized insult traditions worldwide. Martin (1989) uses ethnographies of speaking to analyze paraliterary performance in the Iliad.

On the eighth-century b.c. Dipylon vase see Watkins (1976). Further detailed work on specific Homeric scenes discussed in this chapter includes Doherty (1995) and Martin (2001) on Odyssey Book 11; Becker (1995) on Achilles’ shield; Dougherty (1991) on Phemius as autodidact; Stephens (2002) on the Linos song and its later reception; Ford (1999) on Odyssey Book 9; Braswell (1982) on the Song of Ares and Aphrodite; and Mackie (1997) on Odyssean stories as distinct from song making. Nagy ([1979] 1999) has a wealth of insightful comments on many individual passages relevant to the poetics of the Iliad and Odyssey.

For an introduction to scholia, see Dickey 2007, 11‒16 (on “scholia” as genre) and 18‒23 (on Homeric scholia). On the different components of the Homeric scholia and manuscripts containing them, see Erbse 1969‒1988, I, xi‒lix; for a survey of ancient scholarship on Homer with a discussion of how it was transmitted in the different sources, see Pontani 2005, 42‒103. On the content of the exegetical scholia, see Schmidt 1976; Richardson 1980; Nünlist 2009. For a survey of the different topics discussed in scholia and for a comparison between scholia maiora and hupomnēmata on papyrus, see Schironi 2012. On how to use the scholia of Didymus and Aristonicus to reconstruct Aristarchus’s work on Homer, see Schironi 2015.