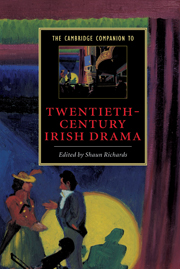 The activities of the Field Day Theatre Company must be seen against the backdrop of the communal violence which preoccupied people in Northern Ireland from 1969 to 1999, when power-sharing arrangements took effect. More than 3,300 people died in the course of this protracted struggle between the more extreme factions of the unionists (mostly Protestant), who want Northern Ireland to remain part of the United Kingdom, and the nationalists (mostly Catholic), who favour some sort of united Ireland. The questions of whether and how to deal with the 'Troubles' worried artists in every medium and genre throughout this unsettled period in Northern Ireland. Failure to confront the atrocities left one open to the charge of ignoring the most vital, dramatic subject matter available.On the other hand focusing too exclusively on current events might make one's art ephemeral while raising suspicions that one was cashing in on the crisis or exploiting other people's pain for personal benefit. Field Day, founded in 1980, represented an attempt by six Northern artists and intellectuals – Brian Friel, Stephen Rea, Seamus Deane, Seamus Heaney, David Hammond and Tom Paulin – to respond to the unsettled political situation in the Province in a manner which seemed to them socially, morally and creatively responsible. The company has now been in existence for more than twenty years, and its legacy includes, in addition to its solid record of theatre production, publications which have set the terms for critical debate in Irish Studies through much of that time. This chapter, however, will focus mainly on the drama produced by Field Day and on its life and achievement as a theatre company.