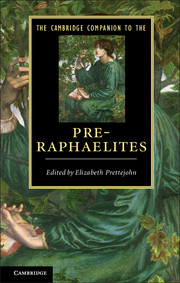 Algernon Charles Swinburne was the dominant literary influence on many of the best-known writers of the late Victorian period, his verse still representing an apparently unsurpassable model to the aspirant young poets of the early twentieth century. Swinburne's own development as a writer was the product of many diverse influences including British Romanticism, modern French literature, Elizabethan and Jacobean drama and Italian revolutionary politics, but his contact with the Pre-Raphaelites, William Morris and Dante Gabriel Rossetti in particular, was undoubtedly one of the major shaping forces. This chapter briefly sketches Swinburne's links with the Pre-Raphaelite circle before assessing the impact of Pre-Raphaelitism on his writing and, most importantly, his poetry.

It is usual to think of Swinburne's first contact with Pre-Raphaelitism as his meeting with Morris on 1 November 1857 and subsequent introduction to Burne-Jones and Rossetti during the period when all three artists, along with others such as Arthur Hughes and Val Prinsep, were engaged in the famous enterprise of painting Arthurian frescoes on the walls of the Oxford Union. However, Swinburne would already have been familiar with Pre-Raphaelite art through his close friend and ‘good angel’ Lady Trevelyan. Pauline Trevelyan, wife of Sir Walter Calverley Trevelyan, was chatelaine of Wallington, a large house near Capheaton, the Northumberland home of Sir John Swinburne, Swinburne's grandfather. She is best known as a patron of the arts and for her cultivation of a circle which included her close friend and mentor John Ruskin, the sculptor Thomas Woolner, one of the original Pre-Raphaelites, and the painter and Pre-Raphaelite associate William Bell Scott, all of whom contributed artworks to decorate the hall at Wallington.