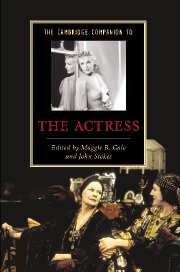 2 - Spectacle, intellect and authority: the actress in the eighteenth century

Nicholas Rowe's play The Fair Penitent, which was first performed in 1703, provided the eighteenth century with one of its most popular heroines, Calista. In the following speech, she vents a rare moment of anger in a play that paints a bleak picture of women's fate: “How hard is the condition of our sex, / Through ev'ry state of life the slaves of man! / In all the dear, delightful days of youth / A rigid father dictates to our will, / And deals out pleasure with a scanty hand; / To his, the tyrant husband's reign succeeds; / Proud with opinion of superior reason, / He holds domestic business and devotion / All we are capable to know, and shuts us, / Like cloistered idiots, from the world's acquaintance / And all the joys of freedom; wherefore are we / Born with high souls but to assert ourselves, / Shake off this vile obedience they exact, / And claim an equal empire o'er the world?” The Fair Penitent was designed to inspire an overwhelming sensation of pity rather than to make an intellectual argument for equality between men and women. Nonetheless, Calista became famous in the popular imagination as an advocate for the female sex and was often cited as a model of endurance by proto-feminist writers. Rowe asks the audience to see through Calista's eyes, if only for a moment, offering a woman's assessment of the world she lives in rather than a more stereotypical vision of passive femininity. Such moments of dramatic intensity were known as 'hits' or 'points' and often remained fixed in the public memory long after the play's plot had been forgotten.