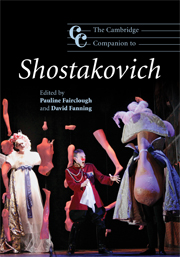 5 - ‘I took a simple little theme and developed it’: Shostakovich's string concertos and sonatas

from PART I - Instrumental works

The seven works to be considered here – Shostakovich's concertos and sonatas for violin and cello, and his sonata for viola – occupy a special place in his output. While the two Piano Concertos, despite their manifest differences in style and orientation, are essentially lightweight (if masterly) exercises in entertainment, the string concertos and sonatas all carry a very powerful expressive charge and speak to us with a distinctive eloquence. There is a sense in which they (the earliest-composed, the Cello Sonata, partly excepted) may be regarded as confessional works. The ability of the string soloists to sustain an immense melodic line, independent of the act of breathing, paradoxically lends their music a profoundly vocal quality, and whether their accompaniment is orchestra or piano, the opportunities for both dialogue and monologue are brilliantly exploited. Indeed all three sonatas possess ‘concerto-like’ elements, not least in the fact that they all contain ‘cadenza-like’ instrumental solos at crucial junctures of the argument.

Yet in these works' powerful emotional life what is ‘confessional’ is – perhaps even more than in Shostakovich's symphonies – far removed from any programmatic critique of external conditions. In so far as we seem to hear the composer's personal voice with a particular clarity, and in so far as that voice laments or protests, we may attribute such expressions to the political pressures and constraints that encompassed him. But the contrast of the individual against the collective is a condition of the concerto form itself, without necessary political implication.