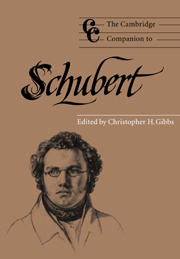 from Part I - Contexts: musical, political, and cultural

On one very beautiful October afternoon . . . they got out at Nussdorf and immediately looked to see whether they could see the thick smog which would always hover over the city, breeding diseases - but they did not find it; rather on the right were beautiful green mountains and on the left beautiful green meadows. Above them rose a sundrenched, gray and delicately chiseled tower - the spire of St. Stephen's. Fashionably dressed figures were strolling by; carriages bearing attractive white numbers on their drivers' seats criss-crossed, carrying beautiful men and women seated inside. The coachmen's faces, owing to their especially fine appearance, betrayed not the slightest sign of the unhealthy air of the place.

This was the way the eminent Austrian author and painter Adalbert Stifter (1805–68), writing during the mid 1840s, recalled his first impression of Vienna. He penned this description in a thinly veiled autobiographical sketch about himself and two friends who came to Vienna to enter the university. The year was 1826. Stifter was twenty-one years old when he arrived from Bohemia to take up the study of law. Franz Schubert, already quite well known in the city, was twenty-nine and living with his close companion Franz von Schober, two blocks from St. Stephen's.

To the young Stifter – and to most other literate contemporaries of his generation raised in the German-speaking regions of the Habsburg Empire – Vienna was already the stuff of legend. It was a place of seductive paradoxes and symbol of both past grandeur and modernity. Danger, opportunity, squalor, and beauty existed side by side. Vienna with its own uniquely alluring surface possessed (as Stifter recounted) the power to render the ugly seemingly invisible, as if by magic. Yet the conditions of daily life in the city during Schubert's adult life were grim if not sinister. Vienna simultaneously ennobled and threatened the lives of those drawn to it.