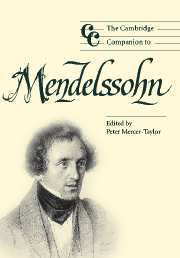 from Part I - Issues in biography

One must thank God when people who actually belong together stick together and don’t part from each other unless separated by death. And, if I remember correctly, it is this then I actually want to mention – and to tell you again once more how your life and activities please me, and how happy I am that we happen to be siblings.

You can well imagine, however, how it is for me – to whom she was present at all times, in every piece of music, and in everything that I could experience, good or evil – and so it is for all of us.

felix mendelssohn, writing to charlotte moscheles after the death of fanny hensel, june 1847

With the exception of Robert and Clara Schumann, no relationship between two European musicians of different genders is as famous as that of Fanny Hensel and Felix Mendelssohn Bartholdy, siblings who have always been linked in biographical depictions. Many of Felix's first published letters, appearing in the two decades after his death, were to Fanny, and the memoirs of friends such as Ferdinand Hiller, Eduard Devrient, and Ignaz Moscheles, who knew him from childhood, all mention his talented sister. Awareness of Fanny's musical abilities spread well outside the family circle during her lifetime; as early as 1830, John Thomson, writing in The Harmonicon, declared that Fanny composed “with the freedom of a master.” After her death, but even before the family history by her son, Sebastian Hensel, was published in 1879, recognition of “Mendelssohn's sister” began to appear in wide-ranging sources. The biographical dictionaries of Carl von Ledebur and François Joseph Fétis, both from the 1860s, contained entries on Fanny. In his 1869 inventory, Hereditary Genius, British scientist Francis Galton listed both Mendelssohn and his “very musical” sister, described as “of high genius.”