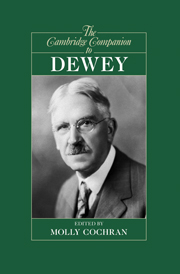 In The Quest for Certainty, Dewey described “the main problem of modern philosophy” as follows, “How is science to be accepted and yet the realm of values to be conserved.” He suggested that a solution to the problem would be found if the separation of theory and practice, presupposed by philosophy since the days of Plato, were overcome. That task, he believed, will be accomplished when the traditional spectator theory of knowledge is replaced by a theory that regards the knower of the world as an agent in that world. Such a theory will be a theory not of knowledge as fixed and immutable but rather of knowledge as the upshot of inquiry as seen in the experimental sciences; it will, he promised, “cancel the isolation of knowledge from overt action.” Once knowledge is seen to be not only compatible with action but requiring action, it follows that the methods of inquiry that lead to knowledge in science are also the methods by which judgments of practice, and hence judgments of value, become known. Moreover, the methods of science are continuous with methods of inquiry in everyday life. Thus, somewhat surprisingly, Dewey, who sneered at an “alleged discipline of epistemology,” found himself again and again developing, presenting, and defending his instrumental theory of knowledge. The central sources are the essays he collected in Essays in Experimental Logic (now scattered in several volumes of the Middle Works of John Dewey), The Quest for Certainty, Logic: The Theory of Inquiry and finally “Experience, Knowledge and Value” in The Philosophy of John Dewey.