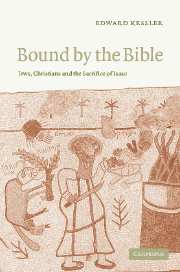 Bound by the Bible
Jews, Christians and the Sacrifice of Isaac
Buy print or eBook[Opens in a new window]

Jewish and Christian interest in the Binding of Isaac has remained as strong in modern times as it did in the first six centuries CE. The biblical story continues to attract significant attention in theological writings as well as in the arts and literature. Modern writers have somewhat different concerns from those in late antiquity but, like the rabbis and church fathers, they ask similar questions of the biblical narrative and their writings demonstrate a continuing exegetical encounter. Clearly it is not possible to refer to many of the modern works that deal with Genesis 22, but the writings briefly discussed below are, in my view, among the most significant as well as representative. They are also to a certain extent inter-related, which reinforces the main thesis of Bound by the Bible: that Jews and Christians share not only a common biblical text but also a common exegetical tradition.

Arguably, modern theological interpretations of the Akedah begin with the writings of one the most prominent post-enlightenment Christian theo-logians, Søren Kierkegaard and his book Fear and Trembling, a title chosen to describe Kierkegaard's discomfort with Genesis 22. His approach to the Sacrifice of Isaac significantly differs from that of the church fathers and the rabbis. Reflecting the dilemma of the post-enlightenment, he grapples with different philosophical and ethical issues. One century earlier, Immanuel Kant admitted he was unable to accept that God would command a man to kill his son – an act that he deemed unethical – and concluded that Abraham should have replied to God as follows: ‘That I must not kill my good son is quite certain, but that you who appear to me as God are indeed God, of this I can never become certain …’ In other words, Abraham should have rejected the command because it was opposed to the moral law.