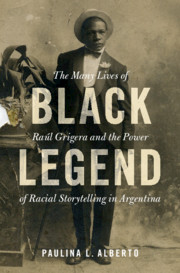 The defamatory posthumous stories about Raúl explained his celebrity as accidental, an extension of Afro-Argentines’ supposed servility, imitativeness, and minstrel-like buffoonery. He was, in their view, nothing but a “broken puppet” of the city’s elite, who kept him as their personal buffoon. “Celebrity” uncovers a completely different story: one in which Raúl made himself into a charismatic Black icon of the city’s popular culture and bohemian nightlife – a Black legend. This feat of self-making – his gamble that being boldly and unapologetically Black would allow his star to rise – is Raúl’s astonishing and unsung achievement. Shortly after his release from the reformatory, Raúl began to live a life that made celebrity possible. He did so largely by tapping into countercultural currents in the city’s rich popular culture: a flickering fascination with Blackness, and a partial re-claiming of Argentina’s maligned Black roots as an emblem of nativist pride or bohemian outcast glamour. Using contemporary texts and images, the chapter reconstructs Raúl’s scintillating persona as "el murciélago" (the bat) – a stylish and mysterious “creature of the night” who played a starring role in many of the city’s after-hour hotspots, especially in the bohemian world of the tango, Argentina’s emerging national dance. Indeed, by tracing Raúl’s presence in early tango dances to which he brought the candombe of his ancestors and neighbors, I am able to tell a new history of the impact of Afro-Argentine dance and music on Argentina’s national rhythm, to show that it did not disappear in the late nineteenth century, as is widely believed. The chapter pays special attention to images (photographs for which Raúl posed, cover art of tangos named for him, and others), as well as to semi-fictional texts read against the grain, in order to paint a portrait of Raúl’s successful efforts at self-fashioning as a Black dandy and Black celebrity.