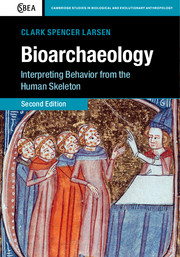 Two elements stood out for me as I wrote this book: (1) human remains provide a remarkably rich record of the human experience, and (2) that record is further enriched in consideration of the context from which these remains derive. This book emphasizes the record that human remains provide for characterizing a broad range of issues about the past, but they have limited value without the development of a comprehensive understanding of their broader context. There are multiple levels of context, including the manner in which the remains were recovered via excavation and during curation, the cultural and social processes and events of the interred and of the surviving members of the community during the burial event, the environmental setting in which the individual lived, and behavioral reconstruction of the interred, all of which are informed by ethnographic, historical, archaeological, and other sources.

A basic issue in bioarchaeology that can be assessed using contextual information is the extent to which assemblages of archaeological skeletal series represent the once-living populations from which they were drawn. For example, does the high prevalence of periosteal reactions, tuberculosis, or osteoarthritis in a series simply reflect a bias toward inclusion of only older individuals who accumulated more lesions over their long lives, or might the series reflect those who were the least frail and survived and recovered from biological stress? Are there individuals missing from the record that limits the kinds of questions we can ask about it? These are fundamental concerns and questions for virtually any scale of study, whether involving a single skeleton, a single cemetery, or a collection of cemeteries representing multiple communities. It is well understood that human remains from archaeological sites may represent a biased representation of a once-living group from any single time. After all, sets of human remains from an archaeological locality are almost never snapshots of biological populations. Rather, they are largely cumulative aggregates of remains, often containing multiple generations of individuals spanning hundreds or thousands of years (Cadien et al., 1974).