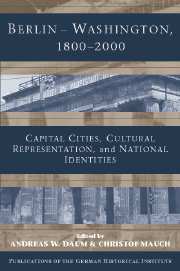 8 - Capital Gardens: The Mall and the Tiergarten in Comparative Perspective

Historians of the District of Columbia have described in detail the planning and development of the National Mall in Washington, the central public space of the U.S. capital. They have studied the draining of the swamps and the planting of trees, they have analyzed the debates over the construction of the monuments and memorials, and they have discussed the history and architectural features of each building along the nation's most famous green. But there has been no attempt to provide a comprehensive interpretation of the historical development of the Mall as a political and symbolic arena. This chapter argues that the Mall has gradually developed over time into a unique public space that celebrates America's national past and asserts the identity of the city as capital. To bring its functional and symbolic features into sharper focus, the Mall will be compared with another park: the Berlin Tiergarten, which in several respects can be seen as the Mall's German counterpart. The Tiergarten and the Mall are the oldest parks in the two capitals; both are sites of political and cultural importance; both have seen national riots, demonstrations, and processions; and in both parks national memories are represented through natural settings, sculptures, monuments, and public buildings.

Heuristically, the comparison will serve as an instrument that helps identify issues and questions that would otherwise not be recognized or asked. On a descriptive level, comparison will help to present the individual case in clearer outline, thereby making the approach “more challenging and stronger analytically . . . more open and more innovative.” Drawing on Henri Lefebvre’s theory of the “production of space,” I will analyze these two parks as both “real spaces” (the natural and social spheres in which we live) and “mental spaces” (the sites and places that we imagine). Lefebvre suggests that spaces can be “read” when “codes worked up from literary texts” are applied to them; but they should also be analyzed as constructed sites that are produced by planners, landscape architects, and other authorities. What follows is a discussion of the two capital parks as nature spaces, mental spaces, and social spaces – as gardens, sites of memory, and (national) public arenas.