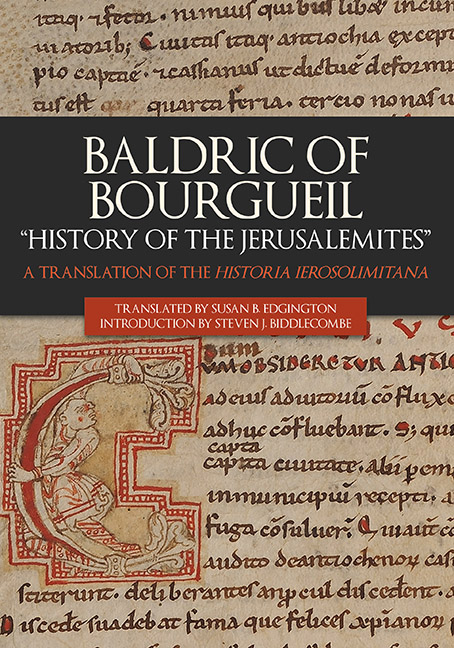 Baldric of Bourgueil: History of the Jerusalemites
A Translation of the Historia Ierosolimitana
Buy print or eBook[Opens in a new window]

Adhemar of le Puy (also known as Adhemar of Monteuil) – Adhemar was present at Clermont and acted as the pope's representative on the crusade expedition. He died at Antioch in August 1098. Adhemar was a unifying figure throughout the crusade, providing religious authority and guidance for the crusade leaders. J. A. Brundage, ‘Adhemar of Puy: The Bishop and His Critics’, Speculum, 34 (1959), 201–12, gives an excellent survey of the career of this central figure on the First Crusade. A more recent assessment can be found in M. Mesley, ‘Episcopal Authority and Gender in the Narratives of the First Crusade’, in Religious Men and Masculine Identity in the Middle Ages, ed. P. H. Cullum and K. J. Lewis (Woodbridge, 2013), pp. 94–111.

Agarenes – One among many names derived from the Old Testament and used by western authors to describe the Arab peoples of the medieval Middle East. It derives from the Egyptian slave Hagar, who bore a son to Abraham, the first he fathered. The son's name was Ishmael and Genesis 16: 12 says of him, ‘He shall be a wild man: his hand will be against all men, and all men's hands against him: and he shall pitch his tents over against all his brethren.’ Hagar and her son were cast out into the desert and Ishmael would go on to father twelve sons of his own who would all establish their own tribes, in parallel to the leaders of the twelve tribes of Israel born to Jacob, son of Isaac, the second son of Abraham. ‘Agarene’ and Ishmaelite therefore became names by which Arabs were known, just as ‘Jacobite’ was used to describe Jews (see below).

Alexios I Komnenos – The emperor of Byzantium from 1081 until 1118 and subject of The Alexiad of Anna Komnene, trans. E. R. A. Sewter, revised by P. Frankopan (London, 2009), a detailed record of the events of his reign written by his daughter. It provides a distinctive Byzantine perspective on the events of the First Crusade and its participants. Byzantium was at this time a still-powerful remnant of the Roman Empire in the east, established by the emperor Constantine in the fourth century AD.