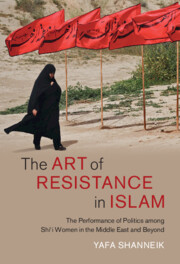 In 2014, I visited a private women-only religious gathering (majlis, pl. majālis) organized by an Iraqi Shiʿi in her house in London. When I entered, everyone was still busy preparing the majlis: some were sorting out the seating area by laying down additional cushions on the carpet while others were making food and drinks in the kitchen. The smell of black tea, cardamom, and saffron filled the house. The walls were covered in black with numerous Islamic Shiʿi embroideries in yellow, green, and red hanging throughout the rooms. Various pictures of the Prophet’s grandson, Imam Husayn, and other Shiʿi figures were displayed. The rooms were decorated in a style to aesthetically evoke a palpable atmosphere of commemoration and imageries of death, loss, and pain. It only took a few minutes until the house was filled with women. The rooms on the ground floor were all used for the majlis, and became very crowded. Once the female reciter (mullāya, pl. mullāyāt) entered, lights were dimmed in order to evoke a sad atmosphere in the room. The mullāya started her majlis by greeting the Prophet and his family (ahl al-bayt) and sending her commemoration wishes to everyone in the room in memory of the death of Imam Husayn, whom Shiʿis commemorate yearly during the month of Muharram. Such commemoration rituals involve various bodily expressions and emotional experiences such as weeping and self-beating. During such majālis, some women stand up and form a circle, rhythmically moving their bodies while beating their breasts and faces. The other women, who remain sitting, support the rhythmic self-beating of the standing women through their own loud weeping and hitting their legs, breasts, and faces in unison.