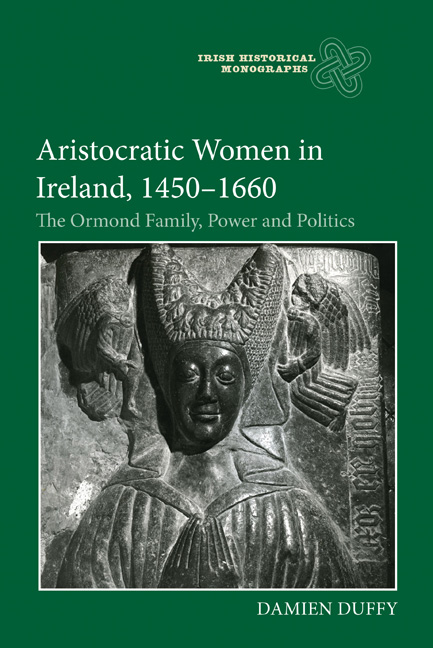 Aristocratic Women in Ireland, 1450-1660
The Ormond Family, Power and Politics
Buy print or eBook[Opens in a new window]

5 - Family, Marriage and Politics: The six Daughters of Margaret Fitzgerald and Piers Butler and the Ongoing Revival of the Earldom in the Sixteenth Century

Matrimonial alliances have always played a vital part in securing and advancing the interests of aristocratic dynasties which relied on (and at times exploited) both sons and daughters to achieve those ends. In sixteenth-century Ireland aristocratic marriage norms and expectations were unique because of the coexistence of Gaelic and Old English social orders. At the same time the negotiations and expectations around carefully arranged aristocratic marriages bore striking similarities with practices in England and throughout Continental Europe. Harris concluded that over time the assets and roles women brought to their affinal families generally helped transform business-like arranged unions into effective and successful relationships. As wives, Harris argues, these women ‘encompassed and shaped both the emotional and material dimensions of their lives’. Writing about French aristocratic women in the same period Donna Bohanon has observed that ‘in the fifteenth and sixteenth centuries, the number of endogamous marriages grew as noble families began to select partners from the growing middle class group’. The social and financial status of the families of both partners was key, particularly in France where, Bohanon argues, the approach to marriage was exceptionally utilitarian.

In England, according to Harris, when aristocratic parents arranged their daughters’ marriages, their ‘ultimate goal was to secure sons-in-law from families with more assets than their own’. Furthermore, if they succeeded in arranging a propitious marriage, their position at court could be strengthened. However, Harris cautions that while the majority of Yorkist and early Tudor aristocratic women married men whom their fathers had chosen, there was no one ‘simple or universal model of aristocratic marriage or wifehood in Yorkist or early Tudor England’. During this period the term ‘preferment’ emphasised the importance of marriage as a means to ensuring successful futures for their daughters and their families, although interestingly, as the following examination of the marriages of these Ormond noble women shows, it was their status that enhanced the standing and influence of the men they married.

In English society ‘the daughters and wives of noblemen and knights [aristocratic families] experienced their identity as women, through the prism of class’. Because of their class, these women brought equilibrium to their affinal families. Aristocratic women as daughters relied firstly on their fathers to provide their dowries, and, following their marriage, they relied on their husbands to ensure that their jointures were respected and protected.