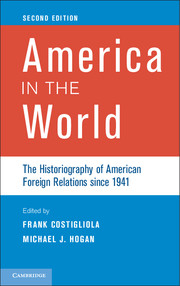 The Cold War came to an abrupt and rather surprising end in 1991, at least considering what might have been. In the twenty years henceforth, the historiography of the conflict has grown immensely, shedding new light on all aspects of the Cold War. The opening of former communist bloc archives, those of other nations that were inescapably drawn into the superpower struggle, and the continued wealth of access to American and Western European sources have made this growth possible. In addition, the “cultural turn” in historical studies of the last two decades has broadened the array of topics that historians consider under Cold War history. This essay highlights some of the trends and work on the history of the Cold War since roughly 1995 with primary emphasis on relations between the war’s two main antagonists – the United States and the Soviet Union. Though necessarily not inclusive of all of the works on the Cold War, it strives to provide an overview that will aid future research.

The first phase of Cold War historiography was characterized by heated debate between “orthodox” historians, who laid blame for the Cold War almost entirely at the feet of Stalin and the Soviet Union, and “revisionist” historians, who contended that the Cold War was largely the responsibility of the United States. The result was one of the most contentious historiographical clashes in U.S. history. Over the ensuing decades historians put forth innumerable works and various interpretations – among them postrevisionism, national security, corporatism, and world-systems analysis – in an effort to move beyond the orthodox-revisionist divide concerning the origins of the Cold War. However, despite the increased knowledge of the Cold War that this scholarship produced, no satisfactory overarching synthesis ever emerged.