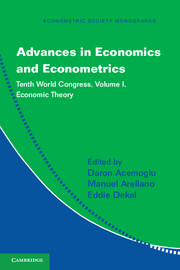 These three volumes contain the invited proceedings from the Tenth World Congress of the Econometric Society. The meetings were hosted by Shanghai Jiao Tong University and were held at the International Convention Center in Shanghai on August 17–21, 2010.

As program co-chairs, much of our effort went into the design of the invited symposia. We chose topics we thought were important, of current research interest, that had reached a sufficient level of development, and with potential for long-run impact on the profession. After considerable discussion, we ended up with fifteen invited sessions, each organized around two papers. We encouraged authors to write papers that are broad but not necessarily comprehensive literature surveys.

Every day of the Congress, three invited symposia were run in parallel, broadly classifiable as one in economic theory, one in an applied field, and one in econometrics, although some of the theory and econometrics were as applied as those that we categorized as “applied” sessions. We decided to organize the three volumes by the same principle, ordering symposia by dates of presentation. Symposium sessions had invited discussants, and about half of them wrote up their comments for publication. These remarks are included in their respective volume after the session papers on which they comment. Volume II contains the Frisch lecture, delivered by Elhanan Helpman, and the volumes also include some papers from participants in the three invited policy panel sessions that we organized. We are very pleased with the policy sessions in terms of the breadth they added to the invited sessions. They were held at lunchtime in the central days of the Congress and close one volume each.