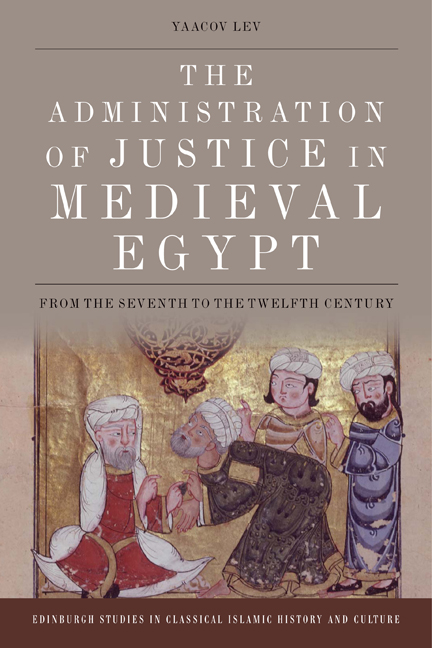 8 - The Administration of Justice in a Broader Perspective

A View from Ottoman Cairo

The medieval Islamic system of the administration of justice had emerged and taken root during the seventh to ninth centuries, before and in parallel with the formation of Islamic law. Its basic structure persisted into the Ottoman period, and we can truly speak about longue durée trends. The scholarship of James E. Baldwin and his publications on the judicial institutions in Ottoman Cairo provide the natural comparative framework. Baldwin describes the judicial institutions in Ottoman Cairo as consisting of the cadi's sharʿī court, the governor's tribunal (dīwān al-ʿalī), and military officers who were involved in policing and regulating the markets, while some notables dispensed justice among their clients. The imperial council in Istanbul (dīvān-i hümāyūn) presided over by the Grand Vizier was also approached by litigants from Egypt and accepted petitions from all Ottoman territories. In addition, in Ottoman Cairo there were also Jewish and Christian courts, but the supremacy of the cadi and his court were taken for granted.

The way justice was administrated in Ottoman Cairo is largely a continuation of medieval realties. The system was made up of several bodies, or agencies, and the question can be asked, to what extent did the governor's tribunal, officers and notables dispense sharʿī justice? Untypical of the medieval administration of justice, the system described by Baldwin was marked by the involvement of powerful individuals, or the privatisation of justice. This seems to be a legacy of the Mamlūk period rather than a reflection of seventh-to twelfth-century realities. The history of the administration of justice during the Ayyubid and Mamlūk periods is yet to be written, and emphasising longue durée trends does not mean that systems were static. Nonetheless, the appointment of Ibn Khallikān as supreme cadi in Syria in 1261 (see Chapter 3) is significant and should be re-examined. As mentioned earlier, he was entrusted with responsibility for the management and maintenance of pious endowments and was appointed teacher of law in several law colleges.