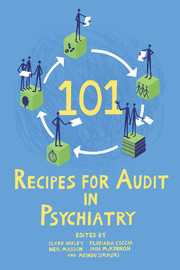 A standard definition of audit is an evaluation of a system or process. The National Institute for Health and Clinical Excellence (NICE), in Principles for Best Practice in Clinical Audit (2002), defines the process of audit as:

A quality improvement process that seeks to improve patient care and outcomes through systematic review of care against explicit criteria and the implementation of change. Aspects of the structure, processes, and outcomes of care are selected and systematically evaluated against explicit criteria. Where indicated, changes are implemented at an individual, team, or service level and further monitoring is used to confirm improvement in healthcare delivery.

An important part of audit is that it is a cyclical process. Changes are made as a result of findings and then the same aspects of care are re-evaluated. Audit is a dynamic, ongoing process of review against standards and implementation of changes.

It appears that Florence Nightingale conducted the first documented clinical audit when she looked into standards of nursing staff hygiene during the Crimean War in the 1850s (Ashmore & Ruthven, 2008). It was not until the healthcare reforms of the late 1980s, however, that audit became widely integrated into modern healthcare, at least within the UK National Health Service (NHS) (Department of Health, 1989). Clinical audit subsequently became one of the six pillars of ‘clinical governance’, whereby NHS organisations were encouraged to introduce a variety of quality-improvement strategies within a coherent framework (Department of Health, 1997). As a result of these reforms, trusts appointed clinical governance advisors to help coordinate relevant audits. In recent years, audit has become an established aspect of clinical practice across the whole of the NHS.

The process of clinical audit begins with the selection of a suitable topic. After choosing a topic, the next stages of audit are as follows: selection of standards; measurement of performance; comparison of performance against standards; and implementation of improvements (Fig. 1). We explain the stages of the audit cycle in more detail in the next section, ‘Completing an audit project’ (p. 7). The stages of the audit process are repeated in a process known as the audit cycle. Re-auditing ensures that the audit continues to loop around the cycle. The steps to the successful completion of an audit project are considered in more detail in the next section.