from Part III - From grammar to meaning: experimental insights

from Part VI - Syntax and the external interfaces 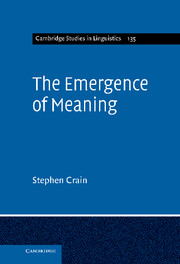