from Part II - The Hebrew Bible and Old Testaments 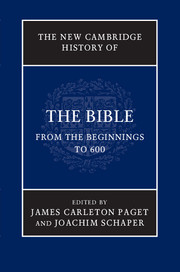