from Section 1 - Perioperative care of patients with endocrine disease 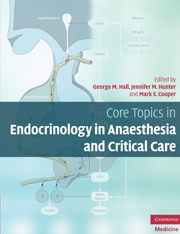