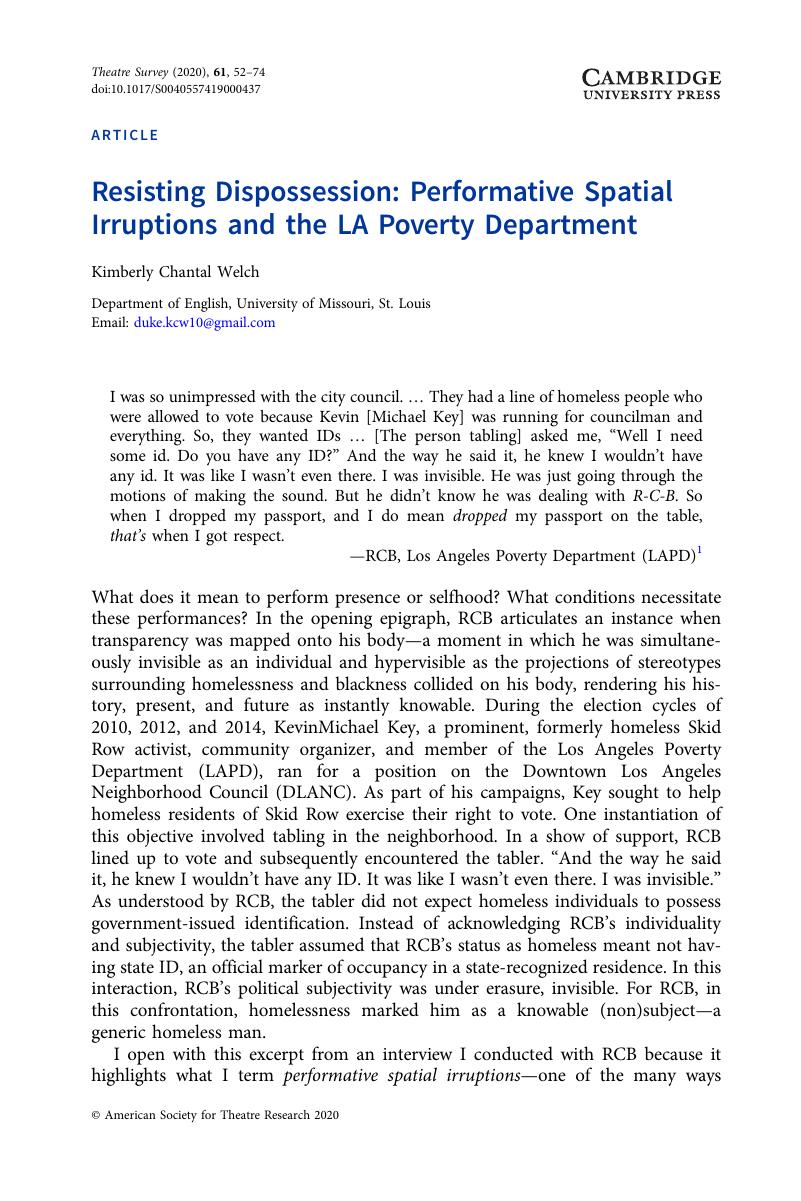 4. My use of the term “carceral state” draws on Dominique Moran's Carceral Geography: Spaces and Practices of Incarceration (Farnham, Surrey, UK and Burlington, VT: Ashgate, 2014). In her work, Moran posits that carceral spaces exist outside of prisons and highlights “the relationship between the carceral and an increasingly punitive state” (2).

5. Stuart, Forrest, Down, Out, and Under Arrest: Policing and Everyday Life in Skid Row (Chicago: University of Chicago Press, 2016), 7.

8. See McKittrick's argument about the logic of transparent space in Demonic Grounds, 5–6.

9. Drawing on the work of Judith Butler and Athena Athanasiou, dispossession “refers to processes and ideologies by which persons are disowned and abjected by normative and normalizing powers that define cultural intelligibility and that regulate the distribution of vulnerability.” Butler, Judith and Athanasiou, Athena, Dispossession: The Performative in the Political (Cambridge: Polity Press, 2013), 2.

12. I place the term “just” in quotations to acknowledge the variety of factors that can hinder attendance to rehearsal, thinking specifically about transportation and time obstacles often present in sites of spatial dispossession.

14. In my project, I understand precarious bodies as those that lie outside of or on the borders of frameworks of intelligibility in dominant material, affective, and/or psychological landscapes. Precarious space, then, is the site(s) in which the subjectivities of the spatially dispossessed are disavowed or under erasure.

16. Keeling, Kara, in The Witch's Flight: The Cinematic, the Black Femme, and the Image of Common Sense (Durham, NC: Duke University Press, 2007), 14–15, argues that people share a set of collective memory-images that are called forth when one is presented with an image. The memory-images are often found in the form of clichés or stereotypes.

17. Los Angeles Poverty Department, excerpt from Chasing Monsters from under the Bed, directed by Henriëtte Brouwers and John Malpede, www.lapovertydept.org/monsters/, accessed 21 May 2016. In the online video, only an edited version of this scene is available. Rather than analyzing the full opening scene, my analysis focuses on the condensed version of the scene archived online.

22. Young, Harvey, Embodying Black Experience: Stillness, Critical Memory, and the Black Body (Ann Arbor: University of Michigan Press, 2010), 9. In his elaboration of the black body, “an abstracted and imagined figure [that] shadows or doubles the real one” (7), Young argues that “[t]he phenomenon of the black body, or, for short, phenomenal blackness, invites a consideration of history, habit, memory, and the process of racial mythmaking” (9).

39. Although the hieroglyphics of Africa's flesh may have been cataloged in his physical body as well, it is outside the scope of this paper to make that argument, as the only engagement I have with Africa is through the Chasing the Monsters production and media clips and news stories about his untimely death.

41. For a more detailed delineation of discourse around drugs in the latter half of the twentieth century in the United States, see Marez, Curtis, Drug Wars: The Political Economy of Narcotics (Minneapolis: University of Minnesota Press, 2004).

43. During the 1970s, President Nixon called for a “War on Drugs.” Continuing into the Reagan administration, state-sanctioned narratives demonized the usage of crack cocaine, linking the drug to black communities and criminality.

45. In the United States, ramen noodles are often a staple in low-income as well as college-student communities; they are relatively inexpensive, versatile (thinking here about the spread), and require only hot water to cook.