Performing the Northern Athens: Dr. Corry's Diorama of Ireland and the Belfast Riot of 1864 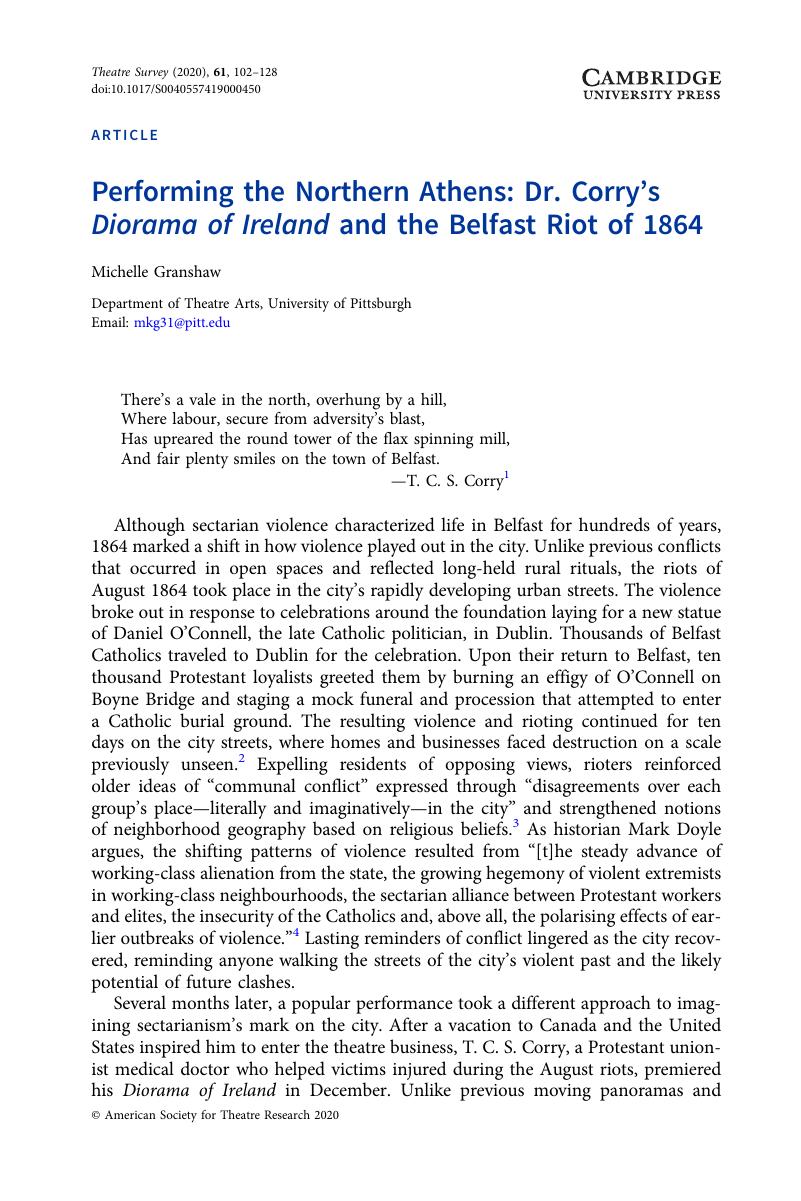 1 T[homas]. C[harles]. S[tewart]. Corry, untitled, in Descriptive Guide Book to the Great National Entertainment, Entitled—Ireland: Its Scenery, Music, and Antiquities, ed. Corry, T. C. S. (Belfast: D. Allen, [1865]), 2, Department of Manuscripts, National Library of Ireland. Corry edited the collection of lecture notes and lyrics from the show published in the guide, but his role in writing the lecture is unclear.

10 Byrne, Ophelia, The Stage in Ulster from the Eighteenth Century (Belfast: Linen Hall Library, 1997), 11–19; McFetridge, Stewart, Overture and Beginners Please: A Peek at Belfast's Old Music Halls and Theatres (Austin, TX: Abbey Publications, 2004), 3–12. McFetridge frames Belfast theatre in a similar manner in his opening pages. He expands the conversation about Belfast theatre to music halls, even though his study is confined primarily to the major theatres, in line with Byrne's approach.

12 Scholar Richard Kirkland's work provides the first general overview of the entertainment's history and Corry's life. He traces the show's genesis, success, and international travels over a roughly twenty-five-year period and argues that it helped both to establish a training ground for Irish performers and to teach a more natural, as opposed to caricatured, performance of Irish identity. He touches on a range of themes that this essay explores in more depth, such as Corry's fascination with the United Irishmen and his capacity to be unionist and proud of Ireland. Kirkland, Richard, “Dr. Corry's National Diorama of Ireland and Irish Performance in Nineteenth-Century Urban Popular Culture,” New Hibernia Review 19.4 (2015): 14–31. Unlike Kirkland's work, the present essay focuses primarily on the performances and theatrical culture in Belfast and analyzes the performances, their images, songs, and transformation from iteration to iteration in detail. Kirkland states that the show's beginnings occurred when Corry purchased Connop's paintings, but I place Corry's inspiration for the show in the context of his trip to the United States and Canada and the wildly successful phenomenon of the hibernicon, an Irish American moving panorama and variety show (see note 28).

13 In this essay, liberal unionism is defined by its meaning in local political life in Belfast and Ulster pre-1886 and draws on historian John Bew's definition of liberal unionism as “three shared assumptions: that the Union guaranteed financial prosperity; that the logic of history entailed the triumph of liberal values; and that British institutions were superior to any of the alternative systems of government on offer in Europe.” This liberal unionist strain is before the break in the British Liberal Party that resulted in the 1886 formation of the British Liberal Unionist Party in opposition to William Gladstone's support of Home Rule. Bew, John, The Glory of Being Britons: Civic Unionism in Nineteenth-Century Belfast (Dublin and Portland, OR: Irish Academic Press, 2009), 166.

18 Hughes, Amy, Spectacles of Reform: Theater and Activism in Nineteenth-Century America (Ann Arbor: University of Michigan, 2012), 41; italics in the original.

22 Phelan, “Modernity, Geography and Historiography,” 136. As Phelan notes, the tendency to see Belfast and Ulster theatre as barren demonstrates how successful W. B. Yeats was in shaping ideas of theatre and modernity through his notions of literary theatre. Phelan, 136–9. In John Gray's short subsection on theatrical entertainments (103–5), he singles out Corry's Diorama of Ireland as helping make Belfast “the birthplace of one of the most successful” moving panoramas. Gray, John, “Popular Entertainment,” in Beckett, J. C. et al. , Belfast: The Making of the City, 1800–1914 (Belfast: Appletree Press, 1988), 99–110, at 105. Jim McDowell's book provides a catalog of major theatres and music halls in Belfast with brief historical information about each venue. McDowell, Jim, Beyond the Footlights: A History of Belfast Music Halls and Early Theatre (Dublin: Nonsuch, 2007), 7–112. Roy Johnston and Declan Plummer's book details Belfast's music scene, and they touch on how it intersects with theatrical culture. Johnston, Roy, with Plummer, Declan, The Musical Life of Nineteenth-Century Belfast (New York: Routledge, 2017).

23 See amusement advertisements in the Belfast News-Letter, Belfast Morning News, and Northern Whig (Belfast) in the 1860s and 1870s; McDowell, 11–13, 124–5; Johnston, Roy, “‘Here Will We Sit’: The Creation of the Ulster Hall,” in Music and British Culture, 1785–1914: Essays in Honour of Cyril Ehrlich, ed. Bashford, Christina and Langley, Leanne (Oxford and New York: Oxford University Press, 2000), 215–32, at 229–30. Although the working and middle classes could possibly attend Corry's performances, the show still remained out of reach for many in the working class. At one point, a “Working Man” requested that Corry reduce his prices further to allow more working-class people to attend. Belfast Morning News, 9 March 1870, 3.

30 Corry, “Diorama of Ireland,” Liverpool Mercury, 7. Black (141) as well as Rockett and Rockett (138) briefly mention the other Irish panoramas that stopped in Belfast.

43 Doyle, 228. For more on the history of riots in Belfast and how they tied to neighborhood segregation, see also Farrell, 139–43.

49 Report of the Commissioners of Inquiry, 6.

55 Ibid., 38; italics in the original. As scholar Tiffany Werth notes, “when struck by astonishment or wonder … an audience might be more easily roused to belief.” Werth, , “Wondering in Henry VIII or All Is True,” in Historical Affects and the Early Modern Theater, ed. Arab, Ronda, Dowd, Michelle M., and Zucker, Adam (New York: Routledge, 2015), 111–23, at 111.

75 Ireland in Shade and Sunshine, playbill.

83 “New Diorama of Ireland,” Belfast News-Letter, 26 December 1864; T. C. S. Corry, “Ireland,” in Descriptive Guide Book, 12. Kirkland, 21, also cites this quote. [Note: All quotes from Corry are quoted for the first time in this essay unless otherwise noted in Kirkland.]

91 Ibid., 13; Patterson, James G., In the Wake of the Great Rebellion: Republicanism, Agrarianism and Banditry in Ireland after 1798 (Manchester: Manchester University Press, 2008), 1–3.

92 Beiner, 11. See also Musgrave, Richard, Memoirs of the Different Rebellions in Ireland from the Arrival of the English (Dublin: Robert Marchbank, for John Milliken and John Stockdale, 1801); Beiner, 16–17; Dickinson, 48. In addition, see Collins, Peter, Who Fears to Speak of ’98?: Commemoration and the Continuing Impact of the United Irishmen (Belfast: Ulster Historical Foundation, 2004).

97 Kirkland mentions Corry's preoccupation with the United Irish, but not within the context of this history of remembering 1798 in Belfast and Ulster. Kirkland, 16.

115 Ireland in Shade and Sunshine, playbill.

116 “The New Diorama of Ireland,” Belfast News-Letter, 13 December 1869. [The same headline had been used in the same paper five years earlier; see note 29.]

Performing the Northern Athens: Dr. Corry's Diorama of Ireland and the Belfast Riot of 1864