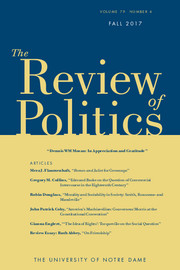 A Symposium on Steven B. Smith's Modernity and Its Discontents: Making and Unmaking the Bourgeois from Machiavelli to Bellow