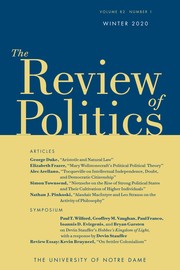 A Symposium on Devin Stauffer's Hobbes's Kingdom of Light: A Study of the Foundations of Modern Political Philosophy