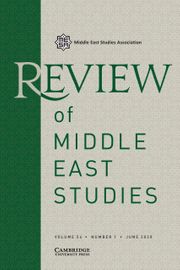 Special Focus: Is There a Canon? Artistic Modernisms Across Geographies

Film and Cinema Studies in Review