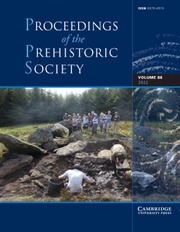 The Broom Lower Palaeolithic locality, on the river Axe at the Devon/Dorset border in south-western Britain, yielded an assemblage of at least 1800 Acheulean artefacts between the 1870s and 1940s through gravel quarrying and antiquarian collection. The bifacial material, predominantly produced in chert but including a small flint component, is characterised by considerable typological diversity and a distinctive asymmetrical element. While aspects of the assemblage have been reported before, this paper presents new work on the artefacts of the C.E. Bean collection and the sample from Exeter Museum. The Bean archive indicates that the artefact patterning is not due to fluvial mixing of separate, typologically-discrete, assemblages. Analysis of the artefacts suggests that hominin knapping strategies were not notably constrained by variations in raw material granular quality, but that the typological variability strongly reflects blank form and shape. However, while the influences of blank form and resharpening, including the use of tranchet flaking, partially explain the assemblage's asymmetrical component, a significant proportion of those artefacts cannot be understood in these terms. The existence of local, short-lived manufacturing traditions, perhaps reflecting the idiosyncratic approaches of individual knappers, is argued to best explain the distinctive asymmetrical element of the Broom assemblage. This interpretation is further supported by (i) the geoarchaeological model of assemblage formation, which assigns the majority of the artefacts to a single phase of occupation, and (ii) the OSL ages of the Broom fluvial deposits (predominantly MIS-9 and 8) and the atypical character of the assemblage in relation to other British late Lower Palaeolithic material, which oppose the notion of longer-lived, locally, or regionally-maintained, traditions.