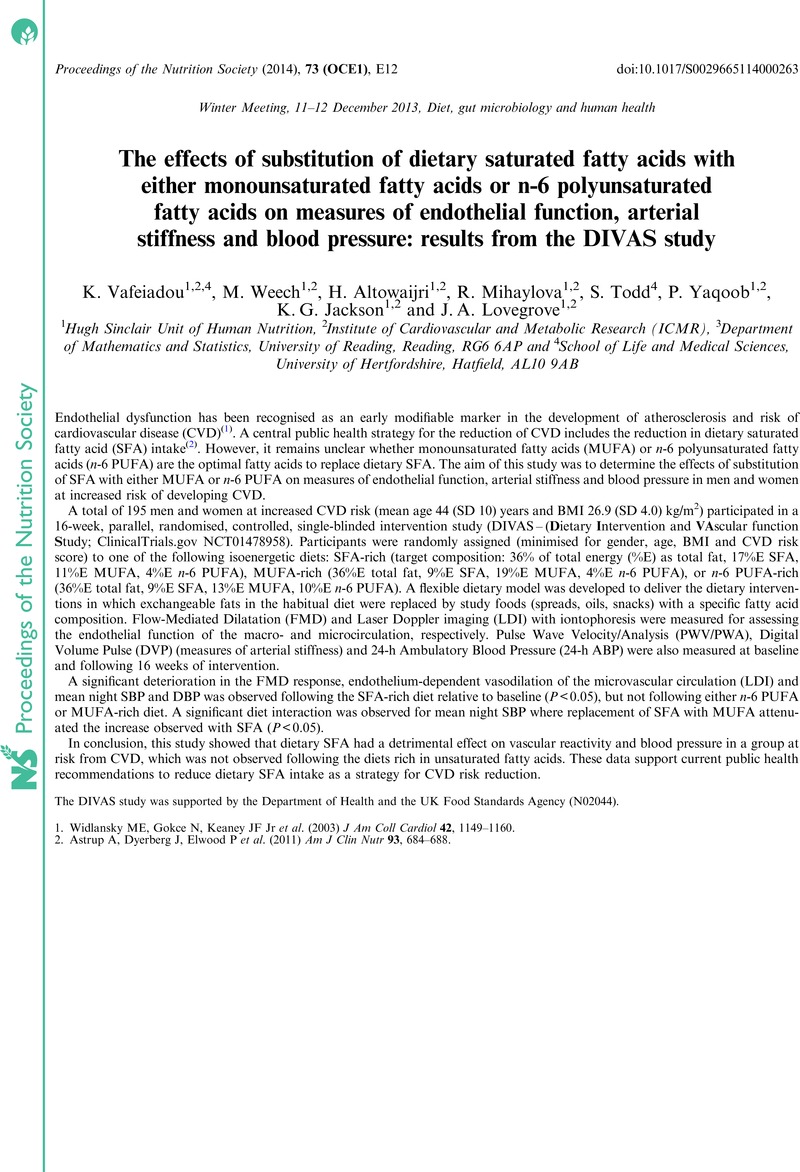 An abstract is not available for this content so a preview has been provided. To view the full text please use the links above to select your preferred format.
Type
Abstract
Information
Proceedings of the Nutrition Society , Volume 73 , Issue OCE1: Winter Meeting, 11–12 December 2013, Diet, gut microbiology and human health , 2014 , E12
DOI: https://doi.org/10.1017/S0029665114000263[Opens in a new window]
Copyright
Copyright © The Authors 2014

Endothelial dysfunction has been recognised as an early modifiable marker in the development of atherosclerosis and risk of cardiovascular disease (CVD)( Reference Widlansky, Gokce and Keaney 1 ). A central public health strategy for the reduction of CVD includes the reduction in dietary saturated fatty acid (SFA) intake( Reference Astrup, Dyerberg and Elwood 2 ). However, it remains unclear whether monounsaturated fatty acids (MUFA) or n-6 polyunsaturated fatty acids (n-6 PUFA) are the optimal fatty acids to replace dietary SFA. The aim of this study was to determine the effects of substitution of SFA with either MUFA or n-6 PUFA on measures of endothelial function, arterial stiffness and blood pressure in men and women at increased risk of developing CVD.

A significant deterioration in the FMD response, endothelium-dependent vasodilation of the microvascular circulation (LDI) and mean night SBP and DBP was observed following the SFA-rich diet relative to baseline (P < 0.05), but not following either n-6 PUFA or MUFA-rich diet. A significant diet interaction was observed for mean night SBP where replacement of SFA with MUFA attenuated the increase observed with SFA (P < 0.05).

In conclusion, this study showed that dietary SFA had a detrimental effect on vascular reactivity and blood pressure in a group at risk from CVD, which was not observed following the diets rich in unsaturated fatty acids. These data support current public health recommendations to reduce dietary SFA intake as a strategy for CVD risk reduction.

The DIVAS study was supported by the Department of Health and the UK Food Standards Agency (N02044).

* Views captured on Cambridge Core between September 2016 - 27th February 2021. This data will be updated every 24 hours.