Selenium (Se) is an essential trace mineral which is important for human health including immune and thyroid functions( Reference Rayman 1 ). The thyroid has the highest Se concentration of all tissues and maternal thyroid function directly influences fetal development( Reference Krassas, Poppe and Glinoer 2 ). This study explores the effect of Se supplementation on thyroid function in UK pregnant women.

At 12 wks' gestation, 230 pregnant women were randomized to 60 μg/day Se (high-Se yeast) or a yeast placebo in the SPRINT trial (Se in Pregnancy Intervention), and remained on treatment until the end of pregnancy. Whole-blood Se was determined at 12 and 35 wks by ICP-MS. Plasma selenoprotein P (SEPP1), an indicator of Se status( Reference Xia, Hill and Byrne 3 ), was measured at 35 wks by ELISA. Thyroid-stimulating hormone (TSH), free thyroxine (FT4) and antithyroid peroxidise antibodies (TPOAb) were measured at 12, 20 and 35 wks by immunoassay.

Whole-blood Se concentration did not differ between Se and placebo groups at baseline. At 35 wks, both whole-blood Se and plasma SEPP1 concentrations were significantly higher in the Se group than in the placebo group (both, P<0.000). Plasma SEPP1concentration at 35 wks was positively correlated with whole-blood Se (Spearman's r=0.776, P=0.000) in the whole population reflecting the fact that even in many of the women allocated to Se treatment, SEPP1did not reach a plateau (see Fig. 1). Hence the combination of Se dose and treatment time did not achieve nutritional Se sufficiency, as measured by plasma SEPP1( Reference Xia, Hill and Byrne 3 ). 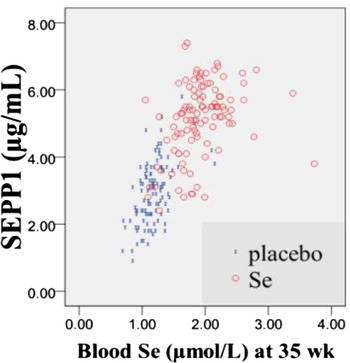 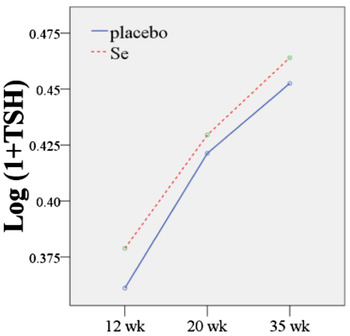 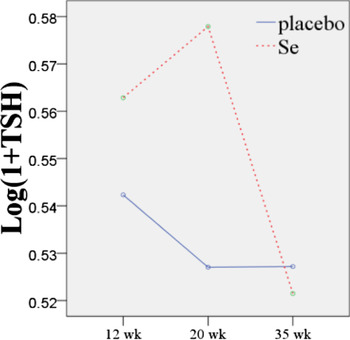 We explored the effect of Se supplementation on TPOAb titre on which Se has been shown to have a beneficial effect( Reference Negro, Greco and Mangieri 4 ). In women with TPOAb >35 IU/ml (TPOAb+ve), the titre significantly decreased in Se and placebo groups but with no difference between groups perhaps because the development of immunological tolerance during pregnancy masked any additional effect of Se.

TSH increased throughout pregnancy in both groups of TPOAb-ve women (Fig. 2) and decreased in the TPOAb+ve women, with an almost three-fold greater decrease in the Se treatment group than in the placebo group though the difference did not reach significance, probably because of the small number of subjects (Fig. 3).

SPRINT was funded by the Wellcome Trust; Dr Mao was supported by a Nestle Nutrition Research Fellowship. We thank RF Burk and colleagues at the University of Vanderbilt, USA, for the assay of SEPP1.