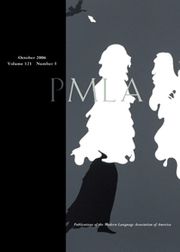 Papers from a conference held on 21–22 October 2005 at the Graduate Center, City University of New York