In medical magnetic resonance imaging (MRI), radio waves induce magnetic changes in tissues, which doctors can detect with a sensitive probe. Similarly, scanning probe techniques detect changes in single electron spins to map fine-scale magnetic fields using a magnetically sensitive probe. But materials such as superconductors and diamagnets, whose magnetic properties only occur internally at the atomic scale, do not emanate a magnetic field in isolation, and thus cannot be probed with current techniques. Scientists have proposed an innovative scheme for detecting such nanoscale magnetic properties. Rather than relying on the material’s magnetic field to perturb a probe, they use a probe’s magnetic field to induce a measurable response in the sample. They report their work in a recent issue of Physical Review Letters (doi:10.1103/PhysRevLett.118.087601).

“There are materials with magnetic properties that are more subtle and nuanced than just having a big magnetic moment. There hasn’t really been a way on the atomic scale to measure the magnetic properties of these materials,” says Michael Flatté, professor of physics at The University of Iowa, who developed the technique.

Flatté and colleague Joost van Bree suggest that a magnetic field from a probe consisting of a single electron spin can induce a detectable response within a sample. Should the sample have any magnetic permeability, the probe’s electromagnetic energy will change. That alteration can be measured, giving insight into the material’s internal magnetic properties.

The method uses diamond nitrogen-vacancy (NV) centers as probes. NV centers are point defects in the crystal lattice, where a nitrogen atom sits adjacent to a carbon vacancy. Remarkably, the NV center’s electronic spin state of 1 remains highly quantum coherent—meaning that electron spins remain synchronized with each other for a long time—even at room temperature. Its magnetic field may be altered through a dipolar interaction near the “nonmagnetic” material, leading to anisotropy in its electronic structure. 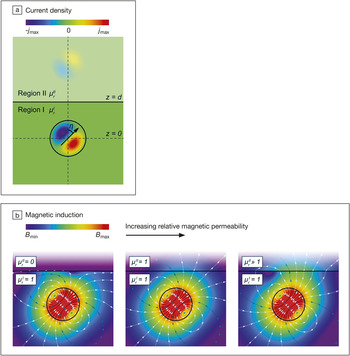 A spin (probe) placed in Region I, adjacent to Region II with different magnetic permeability (a), leads to a detectable (b) magnetic induction (magnitude indicated by color). Credit: Michael Flatté.

Theoreticians have calculated how the NV center electronic structure changes when subjected to a magnetic field induced by the sample. They found that the magnetic response signature has the same symmetry as the changes in electronic states that result from a temperature change, a well-studied phenomenon.

As an example, they located the interface between a ferromagnetic and magnetically dead material in a magnetic tunnel junction—a layered system of commercial interest for its use in thin-film technology. “With our technique, you should be able to identify that interface even though it’s buried,” Flatté says. He believes it possible to measure the thickness of magnetic insulators with better than 0.1 Å accuracy.

“An attractive aspect of this particular proposal is the potential expansion of the range of materials that can be sensed, and is yet another example of how quantum engineering can be used to improve sensing to impact the materials and physics communities,” says David Awschalom, professor of spintronics and quantum information at The University of Chicago’s Institute for Molecular Engineering, who was not involved in the publication.

While Flatté continues theoretical work toward implementing different probes and improving predicted sensitivity, van Bree is now seeking to realize the atomic-scale magnetometer experimentally in collaboration with Awschalom’s laboratory. They look forward to new abilities for sensing a wide range of materials that have no natural external magnetic field.